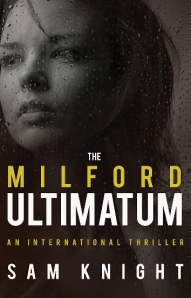 I went to a book launch on Saturday. Well, it was the local launch. I believe the main launch was in London at the Army and Navy Club a couple of weeks ago. As I live near the author and got an invite for the local one I saved myself the train fare and hotel costs and attended that.

The book was Sam Knight’s MILFORD ULTIMATUM. It is about a British ex pat in Bahrain who develops a crush on a local girl with Saudi connections. He is working as a security advisor and things are obviously not about to run smoothly. Throw in a Palestinian connection and British, US and Israeli security interest and we have a witches brew of potential mayhem and intrigue.

Sam has a great background for this work. He worked in the gulf, not as a security advisor I hasten to add, but he knows the territory well and as a former journalist he knows how to write. His ability to build on his experience and extrapolate what ifs promises an intriguing and exciting journey through current tensions.

Writer of novels, plays, screenplays, the odd novella and short story. I used to work as a sort of civil servant: 'Trust me I work for the Government.' In that role I wrote a lot of reports for ministers. Creative writing in action. I now have to work a lot harder to come up with more imaginative storylines than I did then.