The work? Game of Thrones, which I know is both a book in a series of (enormous) books and the title the TV has given the whole series. I have read one George RR Martin book, Fevre Dream, which was an interesting take on the vampire genre set on a riverboat on the Mississippi, but none of the ‘fantasy’ series. I find ‘fantasy’ genre hard to read generally. I enjoyed the Lord of the Rings as a teenager but, having tried to read it again in later life, wonder what on earth I saw in it. It is one of those rights of passage books for me, you probably have to read it once, but it doesn’t bear critical (or uncritical come to that) re-reading. Tolkien’s world is a little more integrated than most but it still suffers from so many of the tropes of ‘fantasy’ plus a tweeness that makes one want to throw up at times. I put ‘fantasy’ in quotes because of course all novels are fantasy in as much as they are a type of make believe. But ‘fantasy’ dwells on the obvious, unbelievable end of imagination with its goblins, elves, fairies and dwarves littered picturesquely about the landscape. I love Alan Garners work by the way, but although this has its share of other worldly folk they never slide into fol de rol tra la la sweetness.

Which (at last!) brings me to the point. George Martin’s work seems to be a Dark Age story, with added dragons, but not too many. As such he does not do tweeness, but rather realistically unpleasant nasty brutish and shortness, by the sound of it in spades.

All of which has seemed to wow fans and critics alike, via the TV screen at least. Until now, when realism has stepped over a line it seems. Rape is, I am unequivocally happy to say, a bad thing. I’m not going to make any excuses for it, I think the ‘she was asking for it dressed like that’ brigade are idiots and possibly dangerous idiots. A woman (or a man come to that) should be able to dress as they like and not have it regarded as prima facie consent to assault. But neither do I think that writing about it should be banned. It depends to some extent of course on context and if someone wrote a paean of praise to the act then I would be amongst the first to condemn it. But writing it into an historical novel (albeit with fantastical seasoning) set in an age of brutality and naked power seems a realistic if unpleasant part of the requirement.

Yes, it is possible to write such novels without reference to such acts, but one suspects that this leads to a bowdlerised and completely false impression of the past. We are back, if we are not careful to Tolkien. The chivalric code was there for a purpose: to try and ameliorate the excesses of a caste of brutal psychopaths and near psychopaths who got their position by the naked violent aggression of their family forebears. Anyone who has cosy ideas of the mediaeval period, early or late, should read some real history and realise that George RR Martin is toning it down for TV.

For me, the question raised by all this, is should a writer be censored, or self censor him or herself, because we are uncomfortable with the facts of our history and our present? No-one should be writing to encourage violence against the person, but does that mean no mention of battles, the excesses of real politik, state deprivation of the poor, the problems of unfettered capitalism, slavery etc? If we are too squeamish to admit the existence of our unpleasant side as human beings, too prudish to write about our excesses and explore the darkness in a novelised form, we are not helping banish it. We are like those who chose to ignore the excesses of Savile and co, allowing it to flourish in the dark. I don’t know whether George Martin has any noble cause in his books, I suspect his aim is to write a good story, but we should not make writers portray a candy coated ‘fantasy’ version of the human condition because we are too scared to face the facts. Writers should hold up a mirror to society, and if we don’t like the reflection, we need to change ourselves, not break the mirror. 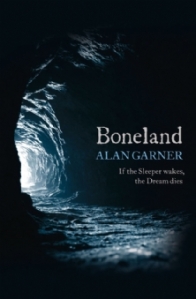 Last year my wife took the enormous lead weighted hints I was dropping and bought me Alan Garner’s ‘Boneland’ as a Christmas present. This was a long time after publication for a committed Garner fan to wait, but I wanted to relive the childhood experience of getting a book by one of my favourite authors for Christmas and having the time to read it in one or two sittings without the hundred and one other things that adulthood, parenthood and general ‘real life’ throw at us. I had after all waited nearly 50 years for the sequel, another couple of months wouldn’t harm me.

Whilst the optimistic glow of Christmas past was a little too rosy in terms of time available, I did manage to carve out enough time to read Boneland relatively uninterrupted. And that proved a different experience than I had imagined. Not because it didn’t transport me back to 1962 when I read Garner’s first book, The Weirdstone of Brisingamen. It did. But in a way I hadn’t expected.

I should explain that Boneland was described as the concluding book in a trilogy of stories. The Weirdstone of Brisingamen and The Moon of Gomrath were classified by publisher, bookseller and librarian alike as children’s or young adults’ books. On the surface they describe the adventures of two children sent to stay in rural Cheshire, on a farm where they encounter wizards, warlocks, witches, elves, dwarves…you get the picture. There was obviously more in them if you cared to look, but the form was there. As Garner moved on through Elidor, The Owl Service and Red Shift, his protagonists (not Colin and Susan of the first two books) also grew, moving through puberty and adolescence against a background that mixed largely Celtic mythology and folk tales with an increasing sense of integrating a collective unconscious of landscape with recurring themes in history through to the present and beyond. His later works became more adult, more intricate and if the magic became less wizardly (a lot less in fact), it remained ever present.

I grew older as Garner grew as an author and so I was not expecting Boneland to be a simple continuation of Gomrath. And it wasn’t. And yet it was.

For those who have misread Garner as Tolkienesque, Boneland was devastating, and many fans of the Weirdstone and Gomrath were desperately confused and disappointed. There are no obvious wizards, witches, svarts, elves or other fantasy characters who introduced us in the first two books to the idea that there were associations of landscape and place beyond the ordinary. What Boneland does is deconstruct the concepts behind the first two novels and leave the workings underneath open and there for any who care to see. You have to have read and remembered Weirdstone and Gomrath to make sense of Boneland. This goes beyond the usual remembering of character names because apart from the main protagonist, Colin, there aren’t any named returnees. But you have to be able to identify places, archetypes and events that may have seemed almost peripheral in the warp and weft of a children’s book. Reading the notes about where Garner got his ideas for the first two books (a much more integrated view of British folk history than Tolkien’s fantasy romp), and following the arc of his work since, gives you an easier entry to the underlying concepts of Boneland than if you had simply read the two original books.

For those who were hoping for a third book of wizards I would ask them to give it another read, abandon your initial expectations and stop looking for the straightforward narrative of a light fantasy. Experience the book for what it is and feel the underlying power that the book throbs with. On a straight reading of the treatment and understanding of a successful middle aged man with autistic spectrum disorder it is fascinating and moving. As a set of keys to explaining what happened after Gomrath ends it is engaging and moderately demanding. As an exploration of the relationships of time, an almost Jungian sense of connection with place and the creation of humanity’s understanding of the universe and its place within it, it is superb.

Writer of novels, plays, screenplays, the odd novella and short story. I used to work as a sort of civil servant: 'Trust me I work for the Government.' In that role I wrote a lot of reports for ministers. Creative writing in action. I now have to work a lot harder to come up with more imaginative storylines than I did then.